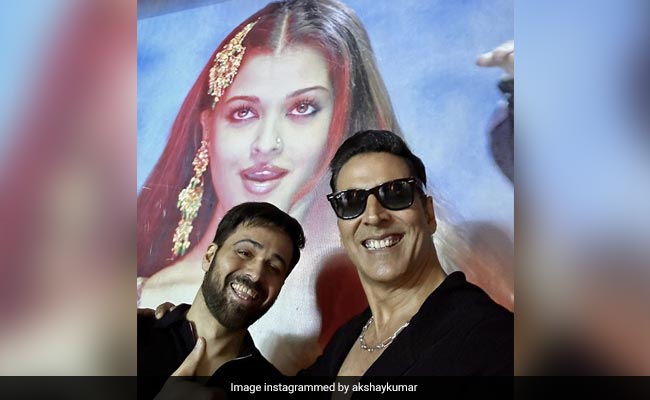 Akshay Kumar and Emraan Hashmi are gearing up for the release of their upcoming film Selfiee. The Raj Mehta directorial will be released on February 24. Akshay Kumar and Emraan Hashmi are super busy with the promotional campaign. Now, Akshay Kumar has shared a fun selfie featuring himself and his co-star Emraan Hashmi. Sounds normal? But it isn’t. There is a Kajra Re twist. Here, the two, in all-black outfits, are seen posing against a still of Aishwarya Rai Bachchan from the peppy track. Akshay Kumar’s caption was equally hilarious. The actor has tweaked the lyrics of the song from the hit film Bunty Aur Babli and wrote, “When I and Emraan Hashmi tried to match kaale kaale naina with kaale kaale clothes.” The actor has also tagged Aishwarya Rai Bachchan to the post.

Emraan Hashmi too has shared the same picture on Instagram but his caption deserves all your attention. “Chalo unke saath nahi to unke photo ke saath selfie hi sahi kyun, Akshay Kumar. [It’s okay if we couldn’t click a selfie with her [Aishwarya Rai Bachchan]. One with her poster will also do. What say, Akshay Kumar?]”

Earlier in the day, Akshay Kumar announced Selfiee’s trailer release date. Sharing a poster from the film, he wrote, “Dono ka dil ek hi superstar ke liye dhadakta hai. Gear up for a unique story of a superstar and his superfan! #SelfieeTrailer coming out on January 22. #Selfiee releasing on February 24 only in cinemas.”

Before this, Akshay Kumar shared a motion poster and wrote, “Fans make a star. Fans can also break a star! Find out what happens when a fan turns against his Idol. Watch Selfiee in cinemas on Feb 24.”