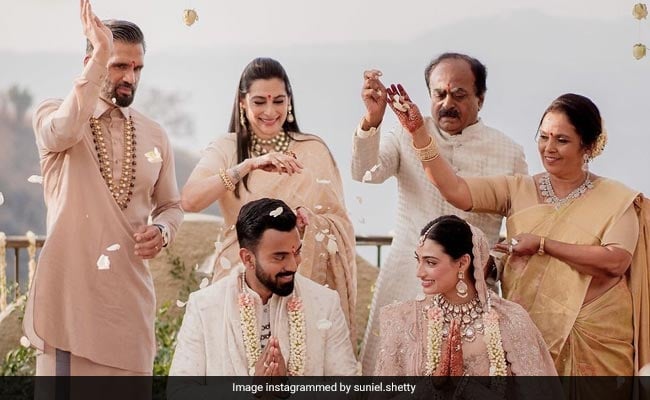 In the second image, Suniel and Mana Shetty hug their daughter Athiya. Suniel plants a kiss on Athiya’s cheek while Mana wraps her arms around Athiya. Sharing the photos, Suniel simply dropped heart and infinity emoticons in the caption.

Athiya Shetty’s friend and celebrity photographer Rohan Shrestha shared more pictures from Athiya and KL Rahul’s wedding album. In one of the images, Athiya can be seen flashing her million-dollar smile. The actress looks pretty as a bride in a chikankari embroidered lehenga from the shelves of Anamika Khanna. Sharing the post, he wrote a sweet note that read, “In all our years of knowing each other, It was so rare to have shot an image of you smiling – forget laughing! Yesterday was a different you, such a happy you. There was peace, a pure love and perfect happiness. Testament to all that you two are.”

Check out more pictures from the wedding album:

Athiya Shetty’s brother Ahan also shared two adorable pictures and captioned it as “I love you both so much. Wish you all the love and happiness together.” Check out the post below:

A wedding reception will be held post the IPL season, Suniel Shetty told the media.