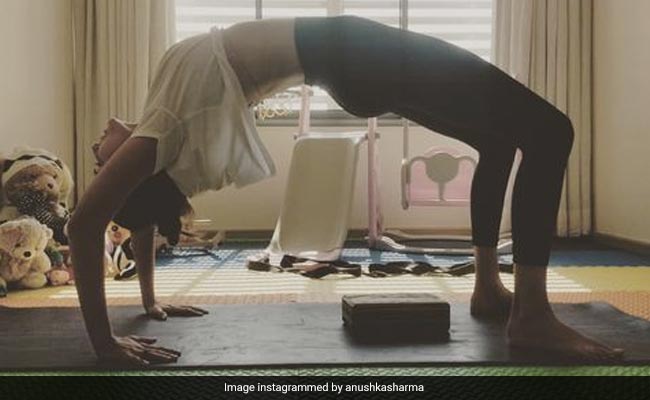 Anushka Sharma’s Saturday was about fitness. The actress, on Saturday afternoon, shared a picture from her yoga session on Instagram and it is just the fitness inspiration we need for the weekend. The actress can be seen doing the Chakrasana (Wheel Pose) in the picture that she posted on Instagram. “Perspective,” Anushka Sharma captioned her yoga post.” Anushka’s Instafam flooded the post with heart emojis and comments. “What an inspiration,” wrote an Instagram user. “The one and only Anushka,” read another comment on the post.

Anushka Sharma swears by yoga. Last year, on International Yoga Day, she summed up her yoga journey in pictures. She wrote: “A throwback of my yoga journey in pictures…A relationship that starts and stops too sometimes but one that has seen me through all ages and phases of my life. Forever grateful to the ancient and truly unparalleled form of wellness.”

The actress wrapped her next project Chakda Xpress last month. She shared pictures from the film’s wrap and wrote: “It’s a wrap on Chakda Xpress and thank you Jhulan Goswami for the final clap to bring an end to the shoot. #ComingSoon #ChakdaXpressOnNetflix.”

Anushka Sharma, who was last seen in the 2018 film Zero, co-starring Shah Rukh Khan and Katrina Kaif, was busy as a producer in the last few years. She recently featured in a cameo appearance in the Netflix film Qala, produced by her brother Karnesh Sharma. She featured in a greyscale montage of the track Ghodey Pe Sawaar.

Anushka Sharma is the star of films like Rab Ne Bana Di Jodi, PK, Band Baaja Baaraat, Sultan and Ae Dil Hai Mushki, to name a few. The actress will next be seen in Chakda Xpress, her first project after the birth of daughter Vamika, who she welcomed in 2021. The film is based on the life of Jhulan Goswami.