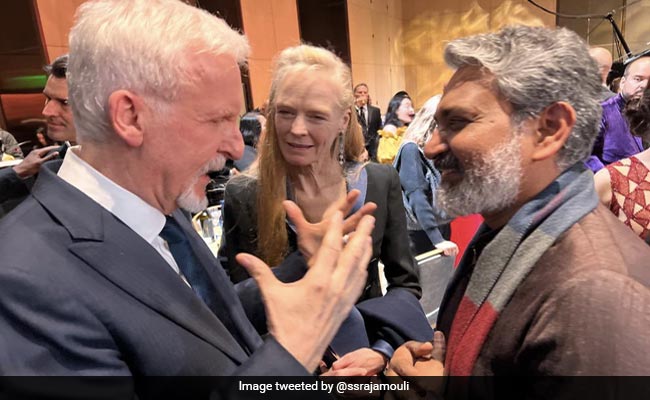 It is not everyday that one gets to meet a legend like James Cameron. So when RRR director SS Rajamouli met the filmmaker, of course he documented the moment on social media. Wait, it gets better. The filmmaker also told SS Rajamouli: “If you ever wanna make a movie over here, let’s talk.” It doesn’t get better than this. Does it? The makers of RRR shared a video of James Cameron’s conversation with SS Rajamouli on Saturday. The Baahubali director told James Cameron: “I saw all your movies… Big inspiration. From Terminator, Avatar, Titanic…Everything. Loved your work.” Replying to which, the Hollywood veteran said, “Thank you. That’s right. Now watching your characters…It’s just like such a feeling to watch them.”

James Cameron shared his inputs on RRR (all great BTW) and said, “And the setup… Your fire, water story. Reveal after reveal. And then you show what happened in the back story. Its like all of them are a homely setup. Why he’s doing what he’s doing and the twists and turns and the friendship and eventually it gets to a point that where he can’t even kill him when the other reverses…It’s just so, so powerful.”

The filmmaker also acknowledged Naatu Naatu composer MM Keeravani, who recently won a Golden Globe and said,” And you composed, right? Because I saw you at the Golden Globes. The score, it’s kind of amazing. Because I like the music to kinda stay out of the way and kinda come on in and support when the audience is already feeling something so it builds the theme. But you are using the music very differently.”

The filmmaker went on the praise SS Rajamouli  and added, “You can only imagine, what it must be like. Everything that goes behind the movie making process. Because of all the work and your passion you’ve put in… all that must be yours. All of them must be surprised, your audience back at your home. And I’m sure this must be a bonus one for you. What you must be enjoying today, the world encounters it.” SS Rajamouli said this thanking the filmmaker: “These words from you are more than an award for me.”

Last week, the makers of RRR shared a glimpse of “the conversation between James Cameron and SS Rajamouli.”

SS Rajamouli posted a few pictures with James Cameron and he wrote: “The great James Cameron watched RRR… He liked it so much that he recommended to his wife Suzy and watched it again with her. Sir I still cannot believe you spent a whole 10 minutes with us analyzing our movie. As you said I am on top of the world… Thank you both.”

The great James Cameron watched RRR.. He liked it so much that he recommended to his wife Suzy and watched it again with her.

Sir I still cannot believe you spent a whole 10 minutes with us analyzing our movie. As you said I AM ON TOP OF THE WORLD… Thank you both pic.twitter.com/0EvZeoVrVa