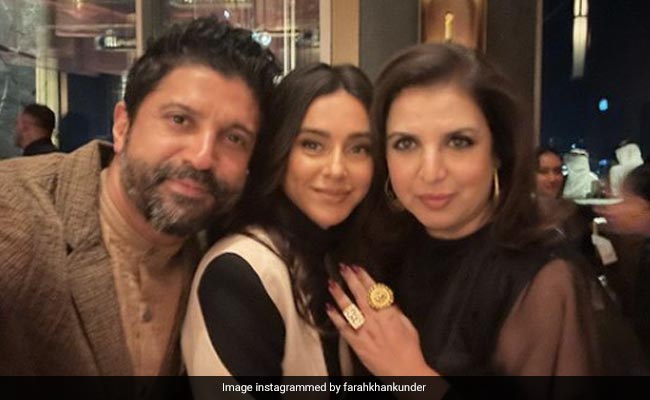 “Every day is a party” for filmmaker-choreographer Farah Khan when she is around her cousin, actor-filmmaker Farhan Akhtar, and his wife, VJ-actress Shibani Dandekar. Her words. Farah, on Saturday, shared a set of pictures of herself enjoying a “beautiful evening” in Dubai with the “right people.” She flew out of Mumbai on Friday to attend the grand opening of the luxurious hotel Atlantis The Royal in Dubai’s Palm Jumeirah but more on that later. In her latest post, Farah Khan is looking every bit gorgeous in a black customised Ken Ferns ensemble. “Every day is a party…if you are with the right people,” Farah Khan wrote in the caption and added, “Bonding with family, Farhan Akhtar and Shibani Dandekar” along with a red heart icon. The album shows multiple images of Farah having a good time with Farhan and Shibani at the event. Reacting to the choreographer’s post, several Bollywood celebrities dropped fiery and red heart icons in the comments section.

Ever since Farah Khan reached Dubai, she has been giving updates about her trip on her Instagram Stories. She has shared the “best view” from her hotel room, as well as giving us glimpses of her OOTD. Apart from her family – Farhan Akhtar and Shibani Dandekar, Farah Khan was accompanied by close friend and interior designer Gauri Khan and fashion designer Manish Malhotra on her flight to Dubai. “Off to Dubai!” she wrote for this group photo on Friday. Farah also added the hashtags “Atlantis opening,” “Bolly gang” and “time pass” to her caption. Take a look:

In terms of work, Farah Khan was last seen in a guest appearance on Bigg Boss 16, where her brother Sajid Khan was a contestant. She has collaborated with filmmaker Karan Johar for his next – Rocky Aur Rani Ki Prem Kahani.