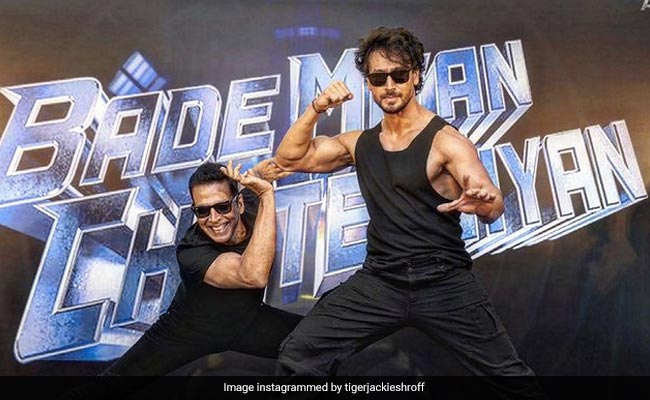 Tiger Shroff has shared a fantastic update related to his upcoming filmBade Miyan Chote Miyan,which also stars Akshay Kumar in the lead role. Tiger Shroff has shared a series of pictures featuring himself and Akshay Kumar from the muhurat shot on Instagram. Oh, and, the actor’s caption needs all your attention. Referring to Akshay Kumar as “bade”, Tiger Shroff wrote, “Bade,  I may have been born the same year you were launched, but I am sure you can still kick and jump higher than me. And, the journey of one of the biggest action spectacles begins today.” Akshay Kumar stepped into films in 1987 with  Aaj, directed by Mahesh Bhatt, and his first big role as the lead actor was in Saugandh (1991). Replying to the post, Tiger Shroff’s mother Ayesha Shroff decided to put some red hearts. Actor Rahul Dev wrote, “Awesome.”

Akshay Kumar didn’t miss the chance to take a fun dig at “chote” Tiger Shroff. Sharing a series of pictures from the muhurat shot, the actor said, “A film I have been most eager to start #BadeMiyanChoteMiyan! Adding to the adrenaline rush is my Chote, Tiger Shroff. Hey Chote, you better remember during the shoot that you were born the year I started my career.”

Bade Miyan Chote Miyan also stars Prithviraj Sukumaran in a crucial role. The actor will play the role of Kabir in the film. Back then, Akshay Kumar shared his first look poster on Instagram and wrote, “The #BadeMiyanChoteMiyan family just got bigger and how! Welcome on board this crazy action rollercoaster, Prithviraj Sukumaran. Let’s rock it, buddy. To this, Prithviraj Sukumaran said, “Thank you, sir! Cannot wait to get on this ride.”

Bade Miyan Chote Miyanis slated for a Christmas 2023 release. The film will be directed by Ali Abbas Zafar. Jackky Bhagnani, Vashu Bhagnani, Deepshikha Deshmukh, Himanshu Kishan Mehra and Zafar have jointly bankrolled the project. It is a remake of the hit 1998 film of the same name directed by David Dhawan. It featured Amitabh Bachchan and Govinda in lead roles. Madhuri Dixit, Ramya Krishnan, Raveena Tandon, Anupam Kher and Paresh Rawal were also part of the film.

Akshay Kumar is currently busy with the promotion campaign of his upcoming film Selfiee. Emraan Hashmi, Diana Penty and Nushrratt Bharuccha are part of the Raj Mehta directorial. It is slated to hit the theatres on February 24.